Customer Service › FAQs › Decorating problems that show up around heaters

Decorating problems that show up around heaters

Very occasionally we get asked about decorating problems that show up around heaters and whether the heaters are to blame.  However on the rare occasion that we do, in all cases there are underlying problems which the heater – in fact, any heater – is just accelerating or making evident by simple virtue of it doing its job (heating). In all cases, the underlying problem lies elsewhere and will still need to be addressed.

Here are problems we are aware of:

Black marks above the heater 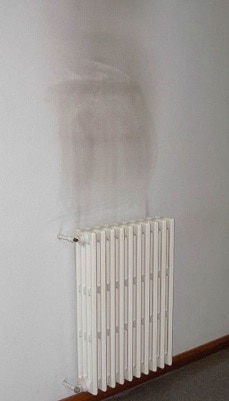 Black marks appearing above a heater is a phenomenon called “Thermal Tracking” or “ghosting”.

The problem is the result of airborne particles, usually in damp environments, clumping together and convecting up behind the heater, before condensing on the colder surfaces above the heaters.

These particles can be anything from soot or fumes from ovens or stoves, candles, cigarettes, log burners, car exhaust fumes from the street or even incense sticks.

In cases where the walls are also damp, the particles can also be due to the formation of mould in paintwork or wallpaper on the warmer thermal “tracks” that exist above the heater.

The problem tends to be worse in draughty houses and damp atmospheres.

You should seek professional advice from a builder or decorator. However in general the following steps can be taken.

Depending on the surface of the wall, the black marks can be cleaned regularly and this can reduce the unsightliness of the marks but will not remove their cause.

In bad cases, the wall should be thoroughly cleaned and preferably insulated before a non water-based paint is applied to the wall.

Prevent the sources of draughts in the house.

Reduce condensation levels in the house by the use of extractor fans in bathrooms and de-humidifiers in other rooms.

In cases of thermal tracking, moving the heater to a different location in the room may not fix the issue, just move it to another spot. 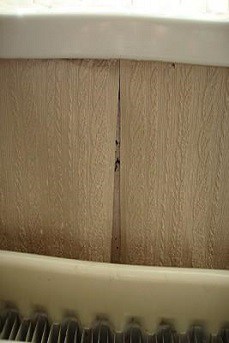 Wallpaper may peel behind a radiator for any of the following reasons. Like the above problem, the heater is not the cause of the underlying problem, but will certainly expose it very quickly.

Wallpaper which is damp will peel away very quickly, usually starting at the seam of the paper where its adherence will be weakest. Wallpaper can be damp for a number of reasons, chief amongst which is condensation. You should never cover your Herschel Infrared heaters, but clothes placed on other radiators to dry is another common cause of damp wallpaper then cracking around the heater.

Poor surface preparation is another common cause of wallpaper peeling, as the paste is unable to make a proper bond with the surface underneath.

Water-based paste or paste of insufficient strength (wrong mixture) is another reason the wallpaper may peel away under the effects of heat, especially if the room itself is damp.

“Papering over cracks” is a phrase with a negative meaning for a good reason.  Cracks that have been papered-over can often still breathe and allow the formation of air pockets and blisters underneath the wallpaper which will lift the paper off the wall.

You should seek professional advice from a builder or decorator. However in general the following steps can be taken.

Remove sources of damp and condensation in the room. If the room itself is damp, consider using a de-humidifier to absorb the moisture. In bathrooms be sure to use an extractor fan.

Use PVA adhesive to repair small cases where the wallpaper is lifting.

Seek professional decorating advice if the problem is widespread.

Moving the heater to a different location in the room may reduce or eliminate the problem (e.g placed on plasterboard or better prepared surface). 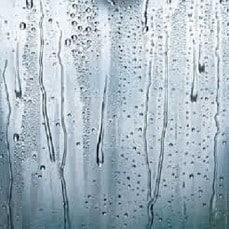 Electric heaters are not a source of water. (Wet central heating radiators however can be if they leak).

Rooms that are damp, are damp for reasons other than the electric heating.

Infrared heaters have a drying effect on objects because they warm surfaces which tends to discourage condensation and keep the moisture in the air.

However, moist air will still try to condense on cold surfaces unless it is removed, either by extractor fans (in bathrooms), loft vents or de-humidifiers.

Allowing condensation to develop in a room can have many consequences, such as the two problems above, as well as the formation of mould.

You should seek professional advice from a builder to determine the sources of damp within your home.

If your home is damp, you need to have means to remove damp air, regardless of your heating system. Usually removal of damp air is performed by extractor fans, loft vents and de-humidifiers.

Seek the advice from a professional decorator or builder to remove long term effects of damp in a house (such as mould, wood rot, peeling wallpaper or flaking paint).

We are still operating as normal but due to the current Covid-19 situation we are unable to guarantee next day delivery from our couriers.

We have great availability of all items shown in stock on the website and our Tech Support and Specification Service continue to operate as normal.

Stay safe and well, everyone.